‘Remarkable’ Renishaw is presented with a Queen’s Award for Enterprise: Innovation 2009 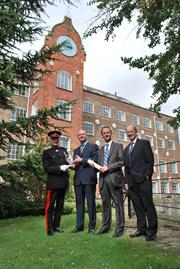 On Tuesday 8th September, Renishaw plc, a world leading supplier of engineering technologies, was presented with a Queen’s Award for Enterprise 2009 by Sir Henry Elwes, Her Majesty’s Lord-Lieutenant of Gloucestershire. This is Renishaw’s thirteenth Queen’s Award since its formation in 1973, and was granted in the Innovations category for the company’s OMP400 high-accuracy touch probe which is used for 3D measurement on computer numerically controlled (CNC) machine tools.

'A remarkable and valuable company'

The Lord-Lieutenant was welcomed to Renishaw’s headquarters at New Mills near Wotton-under-Edge, by Sir David McMurtry, the company’s Chairman and Chief Executive, who together with Dr Tim Prestidge and Mr Steve Lummes who represented Renishaw’s Machine Tool Products Division, accepted the Award in the form of a crystal bowl engraved with the Queen’s Award Emblem. The Citation was read by the Clerk to the Lieutenancy, Mr Peter Bungard, Chief Executive of Gloucestershire County Council.

Speaking about Renishaw’s achievement, Sir Henry said, “Renishaw is one of Gloucestershire’s most remarkable and valuable companies. There are not many in the County that have a record of being right at the very edge of new technology continually, and I know that you are driven by a Board who are determined to remain right at the forefront of innovation.”

Touch probe is benchmark for measurement on machine tools 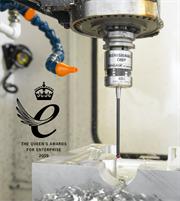 In response, Dr Prestidge, Director and General Manager of the Machine Tool Products Division thanked Sir Henry for his kind words and said, “It is always a pleasure and honour to receive a Queen’s Award which recognises the inventiveness, commitment and hard work of the design teams and also the much wider Renishaw community which has been responsible for bringing the OMP400 touch probe (pictured right) to market. Together they will ensure its continuing success as a benchmark product for complex part measurement on CNC machine tools.”

The Queen’s Awards for Enterprise are the UK’s most prestigious awards for business performance, which recognise and reward outstanding achievement by UK companies. In 2009 only 79 companies were given awards for Innovation, and for Renishaw which earns some 93% of its sales revenues overseas, the international credibility of the Awards is also very important.